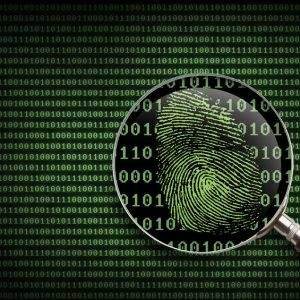 Our mobile escape room can be set up in almost any space! Become a CSI or a detective as you work your way through 30 minutes of puzzles, clues, codes and information to get you out of the escape room. But can you do it faster than the other teams? 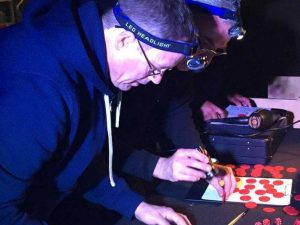 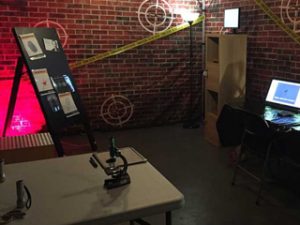 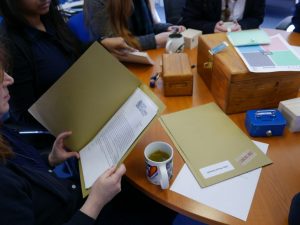 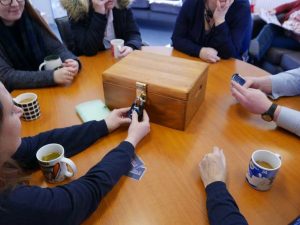 Mobile escape rooms have grown in popularity recently as they are fun, immersive and great for all event types. Our mobile escape room comes in several themes and can be set up almost anywhere, and for any size event.

Each mobile escape room hire comes complete with a games master and assistant to guide teams through and offer clues to achieve their goal. The escape rooms are designed to have one main task – to solve the clues and escape in time.  The games are built up in several layers of clues, challenging activities, puzzles, patterns and codes. Whatever the teams are confronted with – they must face together, working quickly and decisively.

For larger groups of 50+ or if time is tight, we offer a table top mobile escape game experience – see the ‘Escape Room Scenarios’ tab below.  Alternatively a bespoke mobile escape room game can be developed to suit your objectives and incorporate key products. We can theme your mobile escape room to match your business type, event type or even your wedding.

To enhance game play and suit all corporate style events, your mobile escape room can also be branded with your company logo, message or other graphics. these can be added on either the exterior of the room or within the interior walls to or even on to the clues themselves to ensure a complete corporate branding experience.

SET UP: Inside or Outside

(Difficulty Rating 4 out of 5 )
SUITABLE FOR: Up to 10 people per game
SET UP: Inside or Outside
GAME TIME: 30 minutes (We also have a 10 or 15 minute game time available)

SCENARIO:
Digital threats and a criminal that is always one step ahead – The notorious hacker “ The Red Devil”  has finally been caught but has threatened to release a computer virus to destroy the internet if he is not released straight away. Your team are up against the clock to search his hideout finding fingerprints, footprints, chemical analysis and crime scene evidence that’s being lined up under the microscope. Can you live up to your reputation of being the best out there and stop his dastardly virus before its too late?

(Difficulty Rating 3 out of 5 )
SUITABLE FOR: Up to 10 people per game
SET UP: Inside or Outside
GAME TIME: 30 minutes

SCENARIO:
Casino Owner and Mob Boss – now’s your only chance to take him down for good. You’re an undercover detective working at the casino trying to expose a major crime ring – the final piece of evidence you need to take the ring down is on a USB disk. Your mission is simple, retrieve the USB hidden in the Casino Owner’s safe. He ‘walks the floor’ daily between 3pm – 3:30pm so your window is tight and it’s your only chance whilst the office is empty. Whilst the owner is security conscious having hideaway places throughout his office, his memory isn’t what it used to be, and has clues, passwords and reminders signposted around the office. It’s down to you to decipher his information, locate the keys and crack the safe code – just make sure you’re in and out undetected before your time is up!

SCENARIO:
Your trusted friend and colleague has been uncovered as an MI6 spy. He’s been trying to catch a mole in MI5 but is now in deep trouble. It’s down to you to help him, deciphering the puzzles and clues he’s left for you, but you must find out who the mole is before the mole finds him. Work out where his safe house is by analysing his data, looking at the evidence and investigating the other spies. Once you’ve cracked where he is, organise his safe extraction – providing you can find the extraction code in time.

You can externally or internally brand your mobile escape room, by adding branding to the top of the marquee or add pull up banners to promote your brand or product. We can also deliver a bespoke mobile escape room where you give us a theme and we will create an escape room on that. We will even include your theme and branding on the escape room clues. Give us a call to go through you ideas!

“Thanks again to your team, they were so helpful from the start of the booking process to the finished product on the day. Our teams loved the escape rooms and haven’t stopped talking about them since. Such a great addition to a team building day.”
– Poppy

“I just wanted to pass on my thanks to the three staff who were at our school event. The feedback from the students was very positive. I didn’t get a proper chance to say thank you at the end because it was all very rushed this end! Hanah was also a great help organising the day!

It's A Knockout Hire

We can provide event entertainment, event games and mobile escape rooms across the whole of the UK. Leisure King are an events management team based in Dartford and Gravesend in Kent, giving us close access to the M25 and events in London. We can supply you with a mobile escape room or table top escape room at your event in Maidstone, Tunbridge Wells, Ashford, Basildon, Brentwood, Canterbury, Southend, Chelmsford and beyond.

Contact us for a quote for your event. Fill out our enquiry form and we will get back to you with all the details!

If you would prefer to speak to someone about your booking our head office is open Monday to Friday, 9.30am to 5pm.

Take a look at some of our popular event packages. Selecting an event package ensure you pay the best price for your event entertainment or event catering.